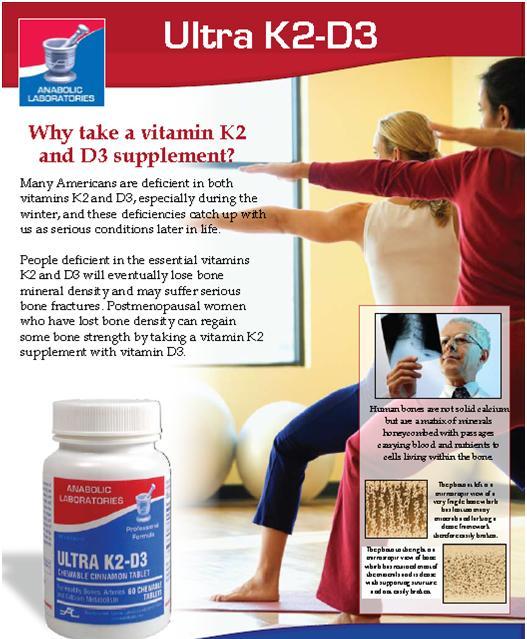 - Vitamin K2, also known as menaquinone-7, menaquinone-9 and menaquinone-4, are the small molecules required for modification of proteins which deposit calcium in bones

Osteoporosis is the underlying cause for breakage of the large supporting bones in humans, especially post-menopausal women and seniors of both sexes. Accidental falls are often morbid and can become mortal. The onset of osteoporosis is now considered direct indicator of overall health.

Osteoporosis is a syndrome in which the bone micro-architecture is disrupted, the minerals calcium and magnesium are lost and the amount and variety of non-collagenous proteins in bone are also altered. The measured rate of Bone Mineral Density (BMD) loss has now become a hi-tech predictor of death for both men and women from all causes. For many people osteoporosis is directly related to long-term, insufficient dietary intake of calcium, magnesium, vitamin D3 and K2 - in other words nutrient starvation. This dire condition may be due to the decreased appetite of the elderly, decreasing ability to absorb important nutrients with age, lack of sunshine and exercise, substitution of regular meals with non-nutritious snacks, the lack of will power to follow a healthy diet and/or the final phases of chronic alcoholism. It appears the requirement for vitamin K2 also increases with age; bloodstream markers of vitamin K2 deficiency increase with age despite similarities in diet and a steady ingestion of dietary K2. Correlating with these findings, vitamin K2 deficiency is becoming common in the US as we age.

Unfortunately, vitamin K2 is not a common nutrient supplied from fruits and vegetables but is only available in small amounts from meats, fish and eggs. A major source for vitamin K2 in Asia, not suffering osteoporosis at the US rate, is fermented legumes such as soybeans - not a common dietary source in the US. Purified, natural vitamin K2 has recently become available; encouraging a number of recent clinical investigations. Long-term supplementation of post-menopausal Japanese women with vitamin K2, in combination with vitamin D3, resulted in increased vertebral bone mass without any increase in possible adverse effects such as blood coagulation.

These encouraging results have been confirmed by several studies in Europe which have even shown that BMD is sometimes increased with vitamin K2 supplementation. X-ray scans of the femoral necks of women taking vitamin K2 for three years evidenced that actual bone strength, as well as bone density increased with time, as judged by this important indicator. Vitamin K2 has also been shown safe for adult women at the level of several mg/day for several years. The diets of many US adults are also deficient in vitamin D3 because the richest source of this nutrient is fortified milk and our intake drops after the teen years.

At the same time, wide-spread D3 deficiency of North Americans has risen because people are scared and they now avoid sunshine and the outdoors. The majority of Americans, of all ethnic backgrounds, are now seriously deficient in vitamin D3, especially during winter, and this deficiency increases with age. Likewise, calcium intake decreases with advancing age except for those taking supplements, drinking milk and eating plenty of red meats. Calcium and vitamin D supplementation has been shown to increase BMD in the femoral neck and spine and to coincidently reduce the incidence of nonvertebral fractures. Concerns over the safety of vitamin D3 supplementation have been raised but are not well-founded; only persons ingesting more than 40,000 IU per day have been reported suffering vitamin D3 toxicity. People enjoying the sun need not worry about vitamin D3 toxicity because the biosynthesis is tightly controlled and shuts down after a short time under the sun.

Take 1 tablet daily with or between meals or as directed by your doctor. Store in a cool place and keep from children.

Find us on the map